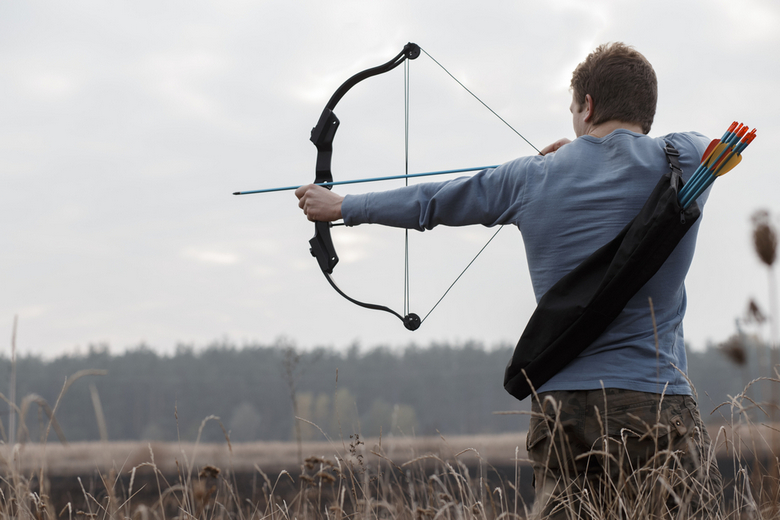 Posted on 12th December, by Hatfield in Archery

If you’re just getting in to Archery, you’ll find that long time archery enthusiasts have their own language when discussing their sport. Sometimes this can be a bit confusing or even intimidating for a beginner, so we’ve compiled this list archery terminology so you can more easily follow the conversation at your local club.
This alphabetical list is a basic glossary of common archery lingo, and our comprehensive guides for recurve bows, compound bows, and arrows, go into a number of the technical terms in greater detail.

Anchor Point
Refers to the point that a person pulls the bow string to before releasing. This point should remain the same for every shot and is typically the side of the mouth, your ear lobe, or another reference point that works for you.

Armguard
A simple piece of armor which is attached to the forearm of the arm that holds the bow, to keep your sleeve from interfering with the string and to protect your arm from a string burn. Typically made from plastic or leather and may also be referred to as a bracer.

B50 Bowstring
A bowstring made from B50 Dacron string material.

Bolt
A short arrow fired by a crossbow.

Brace height
The distance from the string to the deepest part of the handle or grip. Refer to our Compound Bow Guide for details on how the brace height affects your shot.

Broadhead
Arrow tips meant for hunting game. Unlike target arrows, they are usually sharper and wider to inflict lethal damage on their target. These blade can be fixed, or designed to mechanically expand in flight.

Blunts
Arrow points that have wide flat ends that are made from steel, aluminum, rubber, or brass. They are used in practice to reduce arrow loss/damage, and also when hunting small game such as rabbits.

Cable
Compound bows will have one or two cables depending on the cam design. When the bowstring is drawn, the cam/s turn and pull on the cable/s which in turn pull on the limbs of the bow. This bends the limb tips together and is how the compound bow stores it energy.

Cable guard/slide
Rod found on compound bows which keeps the cables away from the center-line of the bow so the arrow can pass by without hitting the cables.

Cam
The wheel or pulley on the end of compound bow’s limbs which transfer energy to the limbs and give the bow it’s let-off ability. Typically round or elliptical in shape. Refer to our compound bow guide for a rundown on the major cam types.

Center shot
A center shot bow has a sight window inset in to the centerline that runs along the bow from end to end. This ensure the sight is in line with the string and removes the requirement for an arrow to bend around the riser when released.

Clout Archery
A type of archery game where the archers shoot arrows towards a flag (the clout) and score points based on how close to the flag their arrows land.

Draw Length
Draw length is the distance between the bow string and the outer edge of the riser when you hold a bow at full draw. Draw length is a key measurement which determines how powerful your shot will be and the length needs to be tailored to your own arm measurements. To understand how to determine your draw length, refer to our comprehensive compound bow or recurve bow guides.

Draw Weight
Draw weight is the amount of weight in pounds that an archer will pull while drawing the bow, and is the key factor in determining how much power is applied to propelling an arrow forwards. Draw weight is determined differently depending on whether you have a recurve bow or compound bow, so again, refer to the relevant comprehensive guide.

Dry Fire
The act of shooting a bow without an arrow nocked. Dry firing is very damaging to bows and should never be done.

Fast Flight String
Fast Flight is a brand of High Modulus Polyethelene (HMPE) string made by Brownell. The string is very popular due to its low-stretch nature and requires a bow with reinforced limbs to handle the extra stress. Fast Flight is sometimes used as a synonym for other HMPE bowstring brands.

Field Archery
Shooting of archery targets in an outdoor environment, typically a forest setting. Target distances can either be marked or unmarked. Unlike target archery, archers may also have to compensate for targets that are placed at a higher or lower elevation than the shooting position, which adds another element of difficulty.

Field Points
Typical target archery arrowheads. Points are usually no wider than the arrow shaft and are not barbed to ensure they can be removed easily from targets.

Fletching
These are plastic vanes or feathers at the end of the arrow shaft used to stabilize the flight path of the arrow.

Flipper rest
A small simple arrow rest which looks like a small piece of wire or a tab. A flipper rest is designed to provide minimal interference to the fletching when firing an arrow, but doesn’t hold the arrow in place as securely as some of the other rest types.

Flu Flu Arrow
An arrow with large bushy fletching to increase drag and limit the flight distance.  Typically used to shoot airborne targets or in recreational shooting where the arrow must not fly too far away.

Grain
A grain is 1/7000th of a pound and is the measure of weight used in Archery when weighing arrows or arrow tips. For safety reasons, it is recommended that your arrow has at least 5 grains of weight for every pound of peak draw weight. (eg a 70 lbs bow would need a 350 grain arrow as a minimum)

IBO Speed Rating
An indication of how fast a bow can fire an arrow (measured in feet per second) using the IBO standard testing guidelines. The IBO test requires the bows to have a 70 lbs peak draw weight, a 30” draw length and they must shoot a 350 grain test arrow. Most quality compound bows will shoot over 300 FPS, with the most powerful models exceeding 340 FPS.

Judo point
A blunt point but with spring arms which grab onto the target, plants, or the ground to keep the arrow from skipping away. When shooting in grass, the arrow usually tips up vertically after landing, making them easier to find.

Kinetic Energy
Kinetic energy measures the level of penetration your arrow possesses. Refer to our compound bow guide for details on how to calculate it, and what level of energy you need for game hunting.

Kisser
Allows you to anchor consistently by placing the kisser on the bowstring and making sure it touches the same part of your lips each draw.

Kisser button
A button placed on a bow string as a reference so that you can find your anchor point consistently.

Let-Off
The percent that a bows holding weight is reduced from its pulling weight when the cams are in the valley (fully drawn).

Loop (also known as a D-Loop or Nocking Loop)
A loop tied on the bow string around the nock point in the shape of a ‘D’. A release aid is attached to the loop when shooting which protects the string from being damaged by the release aid.

Mechanical Blades
An arrow head (broadhead) with two or more blades that open on impact. Usually used for hunting.

NASP (National Archery in Schools Program)
A schools program developed for specific educational and conservation purposes in the United States. The program carries out teacher training so that every participating school can provide NASP archery lessons that are safe for the students, instructors, bystanders and the facility.

Nock
Component that is glued or clipped into the rear of an arrow shaft. The nock lightly grips the bowstring to prevent the arrow from moving around too much during the draw. On traditional arrows, the nock is cut into the shaft itself.

Nocking Point
A mark put on bow string to ensure the arrow is nocked at the same point each time. This may be as simple as a piece of string tied to the bow string, or frequently a brass ring clipped around the string.

Nock Travel
A term used to describe where the nocking point on the bowstring moves up or down after being released. This can occur if the arms of the bow (or cams in the case of a compound bow) move at different speeds when drawing or stop moving at different times. Extreme levels of nock travel can impart an upwards or downwards slant on the arrow when released, which makes it difficult to aim correctly.

Peep Sight
The peep sight is a circle placed on or in the bowstring which allows the archer to line up their sight and target through it (rather than have the bow string blocking their view. Hunters will typically go for larger diameter peep sights to provide for maximum visibility.

Quiver
Holds spare arrows. The most popular bowhunting quivers are attached to the bow and hold arrows on the bow itself. This does add weight to the bow which can be uncomfortable for some shooters, depending on the weight of their arrows. Hip & back quivers are also popular options, with back quivers being the most recognizable design seen in movies.

Rest
A device attached to the riser which is used to hold the arrow in place until it is released. Common rest types include containment rests (such as whisker biscuits), drop away rests, prong rests, and flipper rests.

Shaft
The main body of the arrow. Typically made from materials such as wood, aluminum, fiberglass, carbon fiber, or composites of the above.

Spine
Refers to the strength and stiffness of the arrow shaft and its ability to resist bending. For a detailed understanding of arrow spine, refer to our Arrow Buying Guide.

Stabilizer
Attached to a bow for the purpose of reducing shock and lateral movement after releasing the arrow. A stabilizer will alter the bows center of gravity and will help to keep is steady before releasing.

Target Archery
One of the most popular forms of archery where archers shoot from a fixed distance at round, color coded targets. The targets have 10 concentric rings with high scores awarded for arrows that hit closer to the center. An 11th ring right in the middle of the target is used for tie-breakers and is commonly referred to as the bulls-eye.

Valley
This refers to the area at full draw length between a compound bow’s wall and the point where the let-off disappears.

Wall
Term used to describe the absolute limit of the bows draw length. A solid or hard wall is when the drawing motion comes to a sudden and precise end and cannot be drawn any further. If the back of the drawing motion is pliable or bouncy, it is called a soft wall. A solid wall is usually preferred because it makes it easier to consistently shoot from the same anchor point.