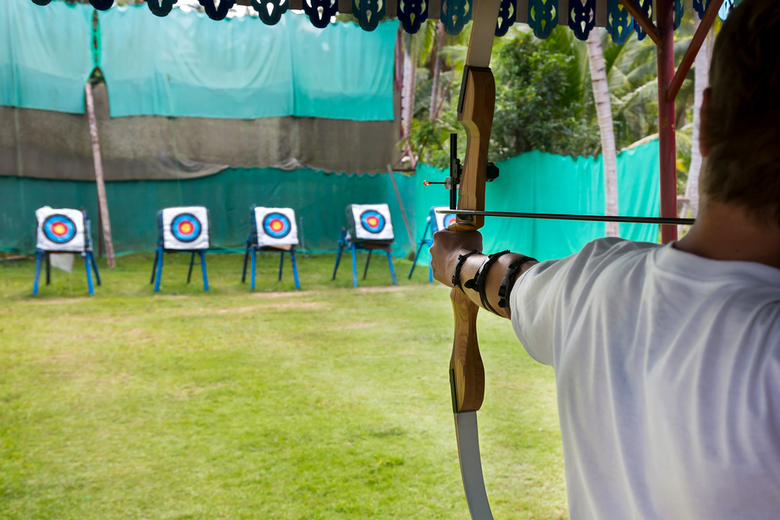 15 Ideas for Archery Themed Parties (and not just for kids!)

Posted on 12th December, by Hatfield in Archery

Archery is such a fun and exciting activity so why wouldn’t you want an archery themed party? Most of the time kid’s get all the fun, but we’ve found some ideas that everyone can enjoy and a couple of these amazing Archery Party ideas are adults only!

Whether you choose to buy or DIY your own party decorations, you’re only limited by your imagination. Things such as table decorations, personalized candy wrappers, banners, invitations, thank you cards, homemade bows and arrows…we think you get the picture. Here are some of our favorite examples:

Hostess with the Mostess – Check out these free Hunger Games printable designs!

Well let’s see there’s food on a parachute (remember the supply drops in the Hunger Games?), amazing cupcake and cake designs (archery but also hunting themed), cookies, fruit in the shape of an arrow, and even chocolate molds (Mockingjay Pendant). Here are some of our favorite DIY, extravagant, and downright cute food ideas from across the internet:

Similar in style to Paintball or dodgeball, Archery Tag uses bow and (thankfully foam-tipped) arrows for an action packed game which is great for family, friends, and of course bachelor parties. Each location will be different depending on where you setup your course, but the game generally consist of two or more teams who play against each other to either shoot each other, shoot certain targets or seize an objective (like capture the flag). The field typically has obstacles and safe zones to further complicate the game.

Ah the old costume party. Even if you don’t want to pull out a bow and arrow you can still dress up! This short list of great costume ideas can be either bought online or created yourself, but the possibilities are endless!

Check out our article on the top 20 famous fictional archers for some more  info and pictures.

Some local ranges such as this one even offer an indoor disco setup with animal targets, now that’s impressive!

Based on the rules of golf, the game uses a bow and arrow to shoot at a series of holes, goals or targets with the main objective to hit the targets in the least number of shots.

Simple and safe Party Archery Sets for children’s parties. These are cheap, safe, and a great alternative to home made sets (typically using cut up hoola hoops).

Using suction cup arrows and a few buckets of paint, a masterpiece rivaling Da Vinci can be made in an afternoon. For a great “How To” guide see All Things Thrifty’s Brave Party Guide.

An archery theme can be elegantly incorporated into any wedding. Take a look at these ideas!

The Buck or Doe theme can be great if you have managed to keep the gender of your baby a secret. It can even be used as a target where your guests try to guess the gender by shooting an arrow at the buck or doe. Problem is, they will want to know who is right at the end of the game!

How amazing are these Zombie Targets!! Grab a few friends and get ready for a Zombie Apocalypse with bleeding targets! Available in paper, bleeding targets, mutating targets (yup they glow when you hit them), vermin, and skeet holding face off. Get ready to discuss your survival tactics and why not incorporate them into an obstacle course or Halloween party.

(not recommended before or when actually shooting!!)

Have a night in with friends and try this drinking game while watching The Hunger Games: Catching Fire.

Have a sip when:

Pick someone else to have a shot:

(absolutely 100% not recommended before or when actually shooting!!)

Thanks to Oxford University, this is the classiest sounding drinking game we’ve found!
The scoring is fairly simple: Everyone has the first two drinks to qualify. Then you go down the list in order, and for each drink you get the score you’d expect if you hit the appropriate ring on an archery face (10 zone scoring). If you can finish the drink in a single motion (e.g. you chug it), its worth double points. Straws are not allowed.

There is no set time limit for finishing each drink, or for finishing the game. You can make up your own if you like to alter the difficulty level; but the guys at Oxford consider you a wuss if you take more than two hours to finish the 10 scoring drinks.

Target Archery is great fun but picture this: a tough mudder style obstacle course with marked and unmarked targets and even a flying pig! (By the way in this scenario the pig is a fake 3D target. please don’t fly a real pig through the air!) Make the course as challenging or leisurely as you like. If you’re anything like us at TheModernArcher, you will want a true competition.